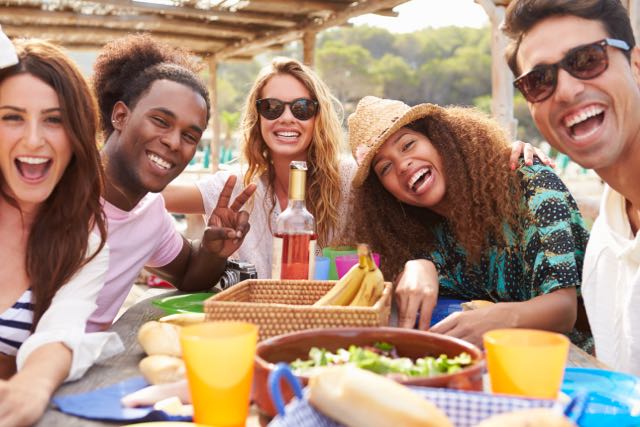 When Mother Nature gifted us with our emotional brains hundreds of millions of years ago, she leap-frogged us ahead of all other species. This collection of nerve centers, known more formally as the limbic system, controls our inter-personal connections. It equips us with the mammalian instincts to nurture our offspring and collaborate with others to protect and advance our kinship groups. To ensure that we do this, Nature designed a simple reward system, called happiness. When we engage socially, we trigger irresistible neurochemical rewards.

The sixth Golden Rule of BodyWHealth is Engage to Thrive. It is one of two pillars of emotional WHealth. We neglect it at our peril. When we heed it, we enjoy the abundance we deserve.

The Grant and Glueck Studies, both conducted by Harvard social scientists, have followed two cohorts of men from a range of socio-economic and educational backgrounds for more than 75 years. The objectives of the research were to identify predictors of healthy aging; in other words, to elucidate the secrets to a happy and successful life. This landmark research demonstrated that social engagement trumped career and financial success, as well as physical health as the top driver of happiness. The others play important roles, but are dwarfed by interpersonal connectivity. We flourish in the presence of supportive, loving relationships.

The currency of our emotional brain is a neurotransmitter called serotonin, the “feel-good” chemical. Pro-social behavior triggers it’s release, making us feel really good. Physical contact is the most important prompt for the release of serotonin in the emotional brain. When we snuggle together on a cold night (a good survival strategy for warm-blooded mammals), we are rewarded with a serotonin boost. Both affirmation and parenting behavior have also been shown to increase the “feel-good” neurotransmitter.

Serotonin also switches off adrenalin and cortisol secretion, opposing the fight and flight response generated in our primitive reptilian brain, and enabling us to control more selfish instincts. We need fear to survive; but to live, we need love!

When we do not engage socially, we risk dangers that erode our WHealth. Loneliness is not only a sad place; it’s a bad place. Research has shown that lonely people die prematurely. The magnitude of the risk is considerable. It’s as bad as smoking! Loneliness impairs the immune system, triggers inflammation and disrupts sleep. Inflammation increases the risk of heart disease, diabetes and cancer, and the quality of your sleep directly affects your BodyWHealth. More importantly, we know that it’s not enough to simply be with people; you can be lonely in a big city, or in a marriage. You have to be engaged with them to avoid unhealthy consequences.

Touch is a bi-directional gift. Both the giver and the receiver are rewarded. The nervous system channels messages about physical contact to our brains, evoking a range of neurochemical responses. In the presence of favorable touch, the brain releases the powerful hormones dopamine, endorphin and oxytocin. These hormones make us feel good, encouraging the nurturing and collaborative social interactions that provoke them. These highly desirable “feel-good” hormones also have important individual health benefits. Empathetic touch has been shown to reduce blood pressure and limit heart rate increases in stressful situations. It reduces stress and anxiety directly, by dampening the stress hormone response. Frequent touch, such as that enjoyed in massage therapy, has been shown to strengthen the immune system. Finally, there is good evidence to show that touch reduces pain sensitivity, a phenomenon of both practical and therapeutic value.

There are many experiments that demonstrate the applied benefits of touchiness. Mothers with post-natal depression are encouraged to massage their babies because it has been shown to improve their depression. Adult tactile affection proves to be highly correlated with overall relationship success and partner satisfaction. The touch of an empathetic caregiver improves patient adherence to medical advice. Similarly, the kindness shown in an appropriate touch from a salesperson improves consumer trust. Waiters and waitresses that touch their guests (again appropriately) get tipped better. Touch has even been shown to correlate with sporting success – touchy teams win more games!

Laughing and smiling, something we do more with friends than alone, drive tangible health and happiness benefits. Even a fake smile has been shown to make you happy! Smiling and laughing reduce blood pressure and strengthen your immune system. They also reduce stress and enhance your mood by releasing several feel-good hormones, including dopamine, endorphins and serotonin. The ultimate evidence for their value is that both laughing and smiling increase longevity.

At the peak of social engagement we become givers. Giving drives tangible health benefits for the giver that are profound stepping-stones towards BodyWHealth. Scientists have demonstrated that we start our lives with an innate bias towards generosity. Toddlers under the age of 2 are happier giving away treats than receiving them. A second chemical, a hormone named oxytocin has been implicated in prosocial behavior. Oxytocin is released when people are empathetic and generous. Moreover, the same hormone actually drives empathetic behavior. Giving drives happiness in adults too, reducing depression, improving weight control, and reducing inflammatory substances that provoke the systemic inflammatory overload.

Finally, when you’re engaged socially, you have fun. Fun is an attitude. It’s a physical process that starts deep in your brain. From there it ignites several important chemical and hormonal pathways. It results in characteristic behavior – smiling, laughing, sparkling eyes, relaxed shoulders and an easy gait. When you have fun, you reach out and touch other lives. All of these actions spread goodwill (an appropriate term) and reward the giver. It is a powerful virtuous cycle.

I conclude all my writing with the simple little phrase “have fun”, a greeting that is loaded with WHealthy intentions.

It’s clear that for BodyWHealth, we need our emotional brain overflowing with serotonin, oxytocin and endorphins. Loving, touching, laughing and smiling all release these feel-good hormones. This is the path to BodyWHealth.

Invoke Your Primal Power, for WHealth
Soar with Purpose